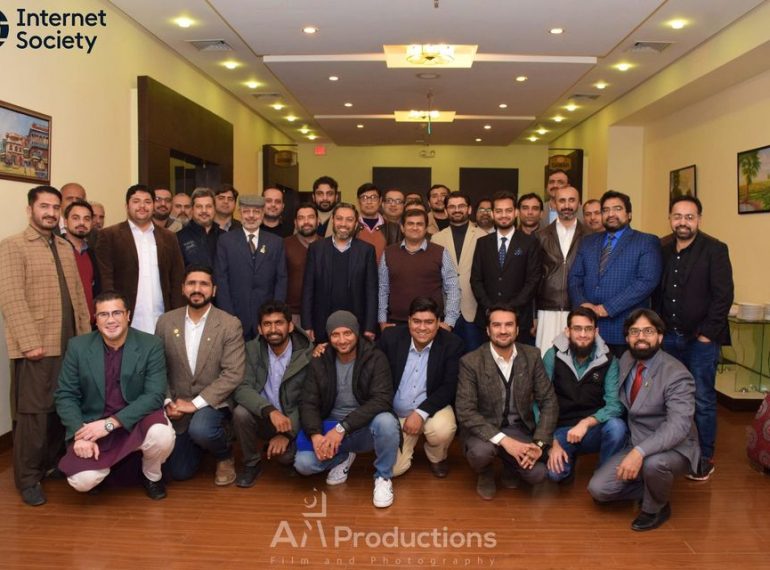 1. Background
In pursuance of the Clause 4 of the ISOC Pakistan Islamabad Chapter (ISOC-IBD) bylaws, AGM was held on 18th January, 2020 at 1500 hrs in Ramada Hotel, Club road, Islamabad. 59 members attended the meeting. Attendance sheet is given as Annexure-A.

2. Agenda Points
The meeting was presided over by the Chair, BoD, Dr. Amir Qayyum. The General Secretary, Mr. Muhammad Farhan welcomed the participating members and debriefed the audience about the meeting agenda. In his opening remarks, Dr. Amir thanked the members for continuous support and highlighted the importance of the AGM 2020. After round of introductions by all participants, following proceedings ensued:

(b) Chapter Financial Report by Mr. Muhammad Adil Ali, Treasurer
Financial accounts of the chapter were presented by the Treasurer where the total funding received and expenses incurred thereof were stated. In the year 2019, the total amount carried forward was Rs. 556,312 and additional contribution of Rs. 274,943 was received from ISOC for the Regional Forum on Digital Accessibility. Total expense in 2019 was Rs. 542,324 and balance of Rs. 288,931 remains with the Treasurer.

(c) Chapter Performance Review by Board of Directors
BoD members, Dr. Amir, Mr. Hashim, Mr. Humayun, Mr. Shabbir and Mr. Mubashar together appreciated the coordination between officers and BoD members. BoD also cherished the chapter activities undertaken during the last year, despite funding challenges. Acquiring membership of the IGF Support Association (IGFSA) was another big achievement by the chapter in last year. BoD suggested that number of technical events/meetings could be increased and chapter registration should be given top most priority in the coming year.

(e) Vote of Thanks to the Outgoing Officers & BoD Members
The chapter recognized the voluntary services of the outgoing officers and BoD members by presenting them with honorary shields, handed over by Mr. Naveed.

(f) Election of Officers
Elections for all positions of officers and Board members were conducted through an online voting system for the first time in the chapter history. An independent Elections Committee comprising of Mr. Naveed Haq, ISOC and Mr. Sohaib Saleem, ex-President, ISOC-IBD evaluated the EOIs of candidates and announced the elections result: –
Board Members: Mr. Hashim Nouman, Mr. Muhammad Shabbir Awan, Mr. Mubashar Sargana, Dr. Amir Qayyum.
President: Mr. Waqas Hassan
Vice-President: Mr. Muhammad Saleem Khan
Treasurer: Mr. Muhammad Adil Ali
No EOI was received for the position of General Secretary whereas there was a tie for the fifth BoD member position. Therefore, it was decided that Extra Ordinary AGM will be called to conduct another round of elections for the position of GS and one BoD member.
President ISOC-IBD presented a token of thanks to the Elections Committee for conducting fair and transparent elections.

(g) Proposed Amendments in the bylaws
Mr. Shabbir Awan proposed an amendment in the definition of Active Member. The proposal was not approved by the majority of the voting members.
Mr. Waqas Hassan proposed an amendment to increase the expenditure limits of the financial authority of the President. The amendment was approved with majority by the House. This amendment will be incorporated in the bylaws and will be sent to ISOC for approval. The updated bylaws will be put on the chapter website after approval from ISOC.
(h) AOB
a. The President explained the progress on chapter registration and informed that as per the procedural formalities of the relevant Government office, chapter leadership requires addition of few unofficial BoD members having the present and permanent address of Rwp/Islamabad. The proposal was accepted by the house.
b. Following amendments in Bylaws were approved with majority approval:
i. Article 5.2: The BoD shall consist of no fewer than three (3) and no more than fifteen (15) volunteer active members. The exact number shall be confirmed by General Assembly on start of each meeting if any change is required. [addition of text]
ii. Article 5.9 b: Being executive BoD member for consecutive three terms. [remove “executive”]
iii. Article 5.9 c: Being executive BoD member or Officer for a cumulative of five terms in past 16 years. [remove “executive”]
iv. Article 5.14: Only for once, the initial elected council BoD members [remove “council”, add “BoD”]
v. Article 5.17: For the purpose of elections of BoD members or chapter officers in the AGM, BoD Chair will appoint a 2 to 3 member Election Committee comprising of non-contesting experienced members, when the AGM is announced. The committee shall handle all election process, before and during AGM, including Call for EoI, receiving EoIs, voting among the eligible candidates and announcement of election results [addition of a new clause]
3. The meeting ended on the notion that new chapter leadership and members will work together for a safe, secure, robust and open Internet in Pakistan.
4. Hi-tea was served after the conclusion of the meeting.

To:
All Members of Internet Society Pakistan Islamabad Chapter